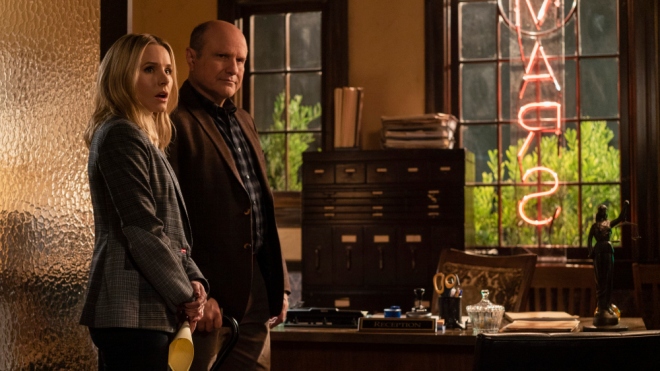 Veronica Mars Season 4 (Or a whole new show according to Stan)
Firstly, where did this new season even come from?! Secondly, what on earth did I just watch?! You would be forgiven for thinking this new season just came from no-where and perhaps this is indicative of Veronica Mars as a whole.
The series ended abruptly despite hinting at a season 4, even including on DVD was the pitch Thomas, the director, made to try and persuade the network to continue the show. Then, after a seven year hiatus, we were blessed with the Veronica Mars movie which was supported by a kickstarter campaign. The film aimed to tie up all the loose ends – Where was Veronica now? Who was she with? What happened to Logan? The movie itself wasn’t amazing but at least it served its function.
And now, after another five years and a full twelve years after the end of season 3 we were given season 4 on a new network, HULU (or Stan in Australia), with seemingly little warning at all. Make no mistake, however, this series was well thought through, included clever writing and consistent character development, it saw the return of several characters and introduced some new ones. These new characters were akin to the current wave of ‘true-crime’ and included Patton Oswald (AP Bio, Happy!, Archer and honestly about 100 more projects), a man hugely familiar with the true-crime scene in a role that was more than just a guest appearance.
We begin the season with Veronica Mars (Kristen Bell – The Good Place, Frozen, Big Mouth) living back in Neptune working alongside her father, Keith Mars (Enrico Colantoni – Galaxy Quest, Just Shoot Me!), in their own private investigator firm. Comforted by the familiar voice over from Veronica and the quick, quippy and largely sarcastic remarks that make her character one that is so greatly loved, the audience feels at home in a new Veronica story, one they have waited so long, too long, to hear. We also see the return of Logan Echolls (Jason Dohring – iZombie, The Originals) and are instantly in love with their love. Now Rob Thomas, director, is no stranger to the ‘teen’ genre, known
for Veronica Mars, iZombie, two episodes of Dawson’s Creek and the 90210 remake. Thomas has managed to build strong relationships between characters and created balance between the suspense and intrigue of investigating/problem-solving with the drama of teenage life. Whilst the characters are now all grown up he is still able to create a balance between the personal – friendships, relationships, proposals – and the professional, which in this case is a serial bomber appearing to target spring breakers. Throw in a Mexican drug cartel, a few ex-prisoners, a local election and a health scare and you have yourself a Veronica Mars series.
It is difficult to completely express my feelings on this series without giving away the ending which I of course don’t want to do, although I did read somewhere that there exists a study that concluded that knowing spoilers rarely affected the level of pleasure felt when watching…… just saying…… All the same I will simply say that many fans were outraged by the ballsy play made by Thomas, although, he stands by his decisions. Whilst part of me is in the mindset of the fans, I would argue that the outcome is befitting of the characters he has so carefully developed and I am not sure any other ending would be as fitting.
Will there be more Veronica Mars? It’s hard to say, so much of me hopes so as there is no other show of this style that is quite as binge-worthy. Did I love it? Mostly, although in the beginning certain aspects of the story were largely confusing, they became a little clearer as time went on but perhaps not as much as I would have liked. To this end, I give season 4 (or 1 if you are following Stan): 3.5 birds out of 5 – Erin

For more Nerds Before Birds click below to listen to our Podcast: