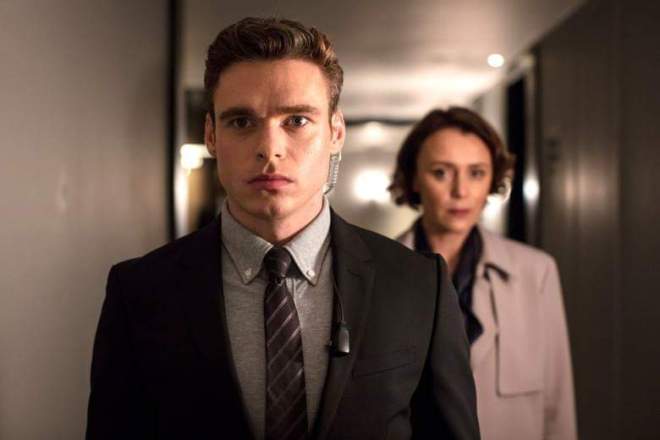 The 2018 British tv series, Bodyguard, produced by the BBC and released this week as a Netflix original, created by Jed Mercurio, is a mere 6 episodes long and manages to slowly build the series to a powerful finally without ever overstaying it’s welcome.

The series is so full of intrigue and double crossing by the time the final credits roll you will almost need a white board to connect the dots between who betrayed who. Richard Madden, most known for his role as Robb Stark in HBO’s Game of Thrones, leads this taught political thriller as a completely believable ex-soldier turned police officer, David Budd, who is deeply troubled by his past.

Budd’s attempts to keep any psychological effects from spiralling out of control makes him an interesting, often untrustworthy, protagonist as he walks a fine line between secrecy and security.

The opening of this BBC production is perfect in setting the tone for the seat gripping series as the stakes are immediately presented in a superbly paced sequence surrounding a potential suicide bomber on board a train that Budd and his children are traveling on.

The beauty of having a protagonist so understandable shrouded in mystery is that it puts ever action of his into question along with the multitude of other potential suspects the series manages to create suspicion around.

After 6 episodes the story wraps up so well that it’s hard to think where it could progress from here.  As a whole it is effectively created but unfortunately in the final episode some lapses in logic and improbable character confessions bring the quality ever so slightly down.

Should the BBC choose to reignite the fuse for a second season I would hope it keeps the same quality of the first 5 episodes as overall it is quite the enjoyable ride.

To listen to other in depth spoiler reviews subscribe to Nerds Before Birds Podcast on all good podcast apps.

Click the links below to listen to our Podcast: